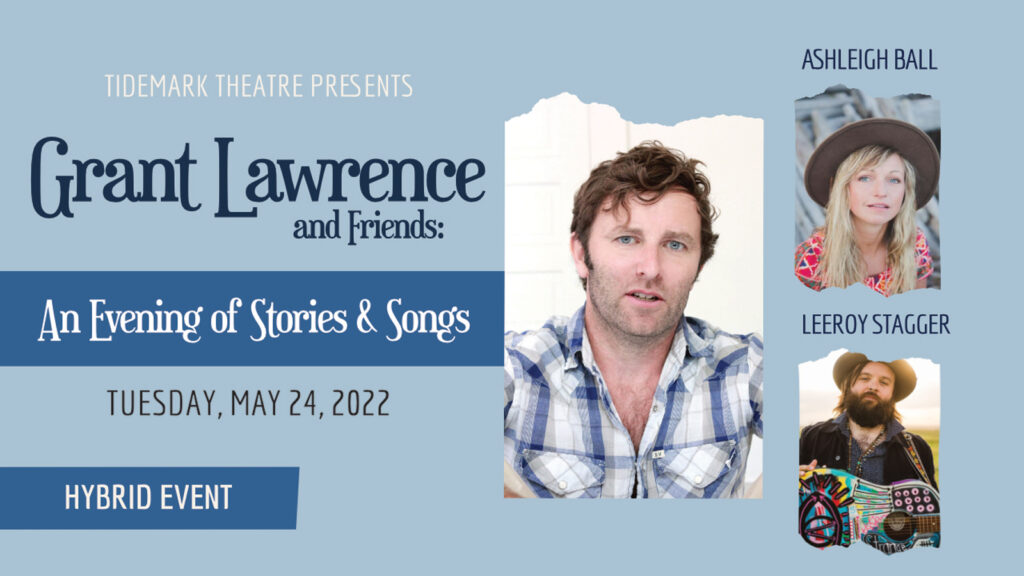 An evening of stories and songs celebrating the release of Grant’s new book “Return To Solitude”, the long-awaited follow-up to his bestselling debut book “Adventures in Solitude”.

Grant Lawrence is an award-winning author, CBC personality, singer, columnist and live event host. He is the author of three best-selling books for adults: Adventures in Solitude (2010), The Lonely En​d of the Rink (2013), and Dirty Windshields (2017). Bailey the Bat and the Tangled Moose, his first children’s picture book, was released in 2021. Grant Lawrence is the first author in the history of the BC Book Prizes to win the Bill Duthie Booksellers Choice twice. Grant is also the host of the CBC Music Top 20, the lead singer of The Smugglers, a Canadian Screen Award winner, and a columnist for the North Shore News and Powell River Peak. He is also a goalie for the Vancouver Flying Vees beer league hockey team. Grant Lawrence is married to musician Jill Barber and they live in Vancouver with their two children. Grant’s next book, Return to Solitude,  is his long-awaited sequel to Adventures in Solitude, and will be released in the spring of 2022.

Ashleigh Ball is a celebrated Canadian musician and voice actress; best known as the magnetic front woman for Canadian indie pop band Hey Ocean! and voiceover actress of Applejack and Rainbow Dash on the infamous My Little Pony series. In 2017, Ashleigh proudly released her first solo EP, Gold in You. Written and recorded in Los Angeles with producer Ajay Bhattacharyya, aka STINT (Gallant, NAO, AllunaGeorge), Gold in You was a distinct departure from Ball’s Indie roots towards a more gritty and mature sound. Featuring songs like “Crazy” and “Lover”, the EP explored themes of asynchronous relationships and the paradox of wanting two different lives at once: stable vs. chaotic, or reality vs. dream. The EP was written over the course of two years while Hey Ocean! was on hiatus and demonstrates the full range of Ball’s vocal abilities both through gripping emotional ballads and electronic and R&B inspired tracks. Her track “Crazy” hit Top 30 HotAC on Canadian radio through the help of Canvas Media.

In 2019, Ashleigh released follow up EP, Gold In You (Nude) a stripped back/alternative version of Gold In You which featured assets with Vancouver indie darling, Luca Focale and the all-womxn, Gracenote Choir.

Ashleigh Ball now looks ahead to her first-ever full length, a multi-single driven release, Before All The Magic’s Gone, produced in Winnipeg, Canada by Deadmen(Matt Schellenberg and Matt Peters of Royal Canoe). The record will start to roll out in June 2020 through until Q1 2021 on Ashleigh’s Believe Music label imprint, A Ball Entertainment.

Leeroy Stagger is an award winning singer-songwriter and producer from Victoria, BC. He has toured and played with artists such as Steve Earle, Jason Isbell, Drive By Truckers, Josh Ritter, and more.

Leeroy Stagger has returned with a heavy duty follow up on 2017’s much-acclaimed Love Versus, the singer recruited Brad Barr (The Barr Bros) to co-produce his best work yet, the aptly titled Strange Path, laces pop hooks and gla​m-rock flirtations with cosmic reflections on loss, forgiveness, love, death and the path to get there. Strange Path showcases an artist at his best, a singer, songwriter, performer, and producer who has stared down his past and faced down his demons, embracing the beauty and pain of a thoughtful life.